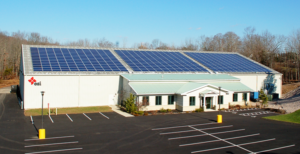 NORTH BRANFORD, CT — Independence Solar announces the completion of a 124 kW rooftop solar array for Engineering Specialties Inc., a leading provider of precision metal stamping and machining for automotive and manufacturing applications. As the largest solar project to be built in the town of North Branford, the 494-panel installation will supply 65% of the annual electrical usage at ESI’s 30,500 sq. ft. facility.

ESI’s investment in the solar system aligns with the company’s overall energy efficiency mission. Since moving to their current facility in 2006, ESI has installed energy-efficient lighting, mechanicals, and air handling systems. As Ron Delfini, President of ESI, commented, “Installing a solar PV system makes sense financially and complements our efforts to optimize energy efficiency. The economics for solar in Connecticut are favorable and Independence Solar helped us navigate through the entire process from initial feasibility into commercial operation.”

James Schwartz, Vice President of Independence Solar explains: “ESI is exactly the type of forward-thinking, innovative company we want to work with. They are continually looking for ways to grow their business and enhance profitability over the long term. The solar system fits well with those objectives.”

Independence Solar’s installation partner on the project was Pat Munger Construction, a full-service building contractor with over 40 years of experience in quality commercial construction. Independence and Munger were able to complete the installation within two months from the project kickoff without impacting ESI’s daily operations.

The system is connected to The United Illuminating Company’s electrical network and has a 15-year contract secured with the utility through the Zero Emissions Renewable Energy Certificate (or “ZREC”) program. The program, in its 2nd year, has provided a significant boost to Connecticut’s solar market and helped the State achieve its aggressive clean energy targets.

About Engineering Specialties, Inc.
http://www.esict.com/index.php
For over two decades, ESI has been a leader in the production, design and manufacturing of metal tool components and equipment. ESI’s mission is to provide its customers with optimal, state of the art engineering solutions and manufacturing services. 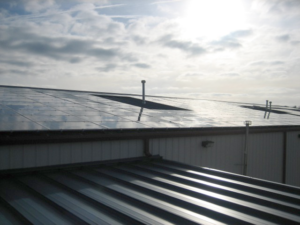 Karl Weber, General Manager at ACM, commented, “ACM’s core business is about protecting the environment. Sourcing our energy from the sun is directly in line with our company’s values and purpose.”

He added, “Independence Solar was a true partner through every step of the process ¾ from financial planning to permitting and even integrating solar onto our website. They made the entire process simple to understand and seamless.”

Independence Solar President Keith Peltzman shared, “It was important for ACM not to experience any disruptions to their day-to-day operations. I’m pleased to say in a time span of just two months, Independence Solar was able to significantly advance ACM’s sustainability goals with a system that will also deliver significant economic returns by hedging against high electricity costs.”

ACM’s customers, partners and staff can monitor the system’s performance and positive environmental impact in real time by visiting: http://live.deckmonitoring.com/?id=acm

About ACM Technologies, Inc.
www.acmmix.com
Since 1999, ACM Technologies, Inc., has developed custom waste water solutions for companies seeking environmentally friendly methods to address their pollution control and remediation needs. ACM’s total recycling of dissolved metals removed from a large variety of waste streams offers customers peace of mind, and eliminates any long-term liabilities when dealing with regulated and non-regulated substances. An industry leader, ACM’s customers can rely on a dedicated technical staff second to none who thrive on innovative, seamless solutions.

GUILFORD, CT — Independence Solar and its installation partner, Pat Munger Construction Company, today announced the completion of a 300 kW rooftop solar array for The Safety Zone, a Guildford, CT manufacturer and distributor of gloves and specialty protective equipment now in its fourth decade of operations.

“Our new PV system allows us to hedge against high electricity costs, enhance our overall bottom line, and showcase our company’s commitment to environmental responsibility,” shared Lon Seidman, a co-owner of the family run business.

He added, “When you take on a complex project of this scope you need a knowledgeable, reliable partner and Independence Solar was exactly that every step of the way.”

The roof-mounted system, comprised of 1,248 solar PV panels, is expected to supply 100% of the electricity used by the 128,00 square foot distribution facility annually. All major components of the system were sourced from US factories, including the solar panels (Oregon), racking system (Wisconsin), and inverter (Massachusetts).

Independence Solar Vice President James Schwartz added, “The Safety Zone has remained a leader in its field for more than 30 years by making sound business decisions based on economic returns and long-term thinking. This solar system aligns perfectly with both objectives. It has been a pleasure working with such an innovative and forward-thinking company.”

Independence Solar called on their highly respected partner, Pat Munger Construction Company, to install the system. Based in Branford, CT, Munger is one of the region’s leading construction companies, providing high quality building services to businesses and municipal customers since 1968. Munger employed experienced, local labor to ensure the construction of the solar system was performed to the highest standards.

About The Safety Zone
The Safety Zone, established in 1973, is one of the leading U.S. suppliers of gloves and other protection equipment and products. Praised for their commitment to exceptional customer service, The Safety Zone furnishes their customers in industrial manufacturing, food service, janitorial services, construction, health care and beauty products with the tools they need to properly and affordably protect their employees and work environments.

GLOUCESTER CITY, NJ — Gloucester Marine Terminal today announced that it is partnering with solar technology leader SunPower Corp. to build the largest rooftop solar installation in North America – a massive, 1.1 million square-foot project on the roof of the Terminal’s refrigerated warehouse near the Walt Whitman Bridge on the Delaware River.

Known as Riverside Renewable Energy, LLC, the $42 million, privately funded project calls for the installation of 27,528 photovoltaic rooftop solar panels that will generate nine megawatts of electricity (9 MW) – or roughly enough to power 1,500 homes – at Gloucester Marine Terminal, which is owned by the Holt family.

The Riverside project will be nearly twice as large as any previous rooftop solar installation in New Jersey, which has emerged as a national leader in the development of renewable energy resources. Construction is underway and should be completed by the fall.

When completed, the Riverside project will generate the equivalent of nearly 80 percent of the Terminal’s power demand. According to estimates provided by the U.S. Environmental Protection Agency, the system is expected to offset more than 9,500 tons of carbon dioxide, approximately the same amount that would be offset by planting 400,000 trees or removing 1,700 cars from the road.

In addition to the Holt family, the Riverside project is a partnership involving SunPower, a global solar technology company that designs, manufactures and delivers the highest efficiency, highest reliability solar panels and systems available today; Rabobank, a leading global bank and financier of renewable energy projects, which will lead the financing for the venture; and PSE&G, which will play a critical role in the interconnection of the project.“

Southampton, PA — NewAge Industries recently completed the installation of a one megawatt (MW) rooftop solar panel system, the sixth largest in all of Pennsylvania. A ribbon cutting ceremony was held Wednesday, June 8, and the system is now in operation supplying half of the plastic tubing manufacturer’s energy needs.

The 1-megawatt system, which consists of 4,082 solar panels, is the largest roof-mounted solar array in Bucks County and the sixth largest in the state, officials said.

The solar project was financed in part by a $1 million solar energy program grant from Pennsylvania’s Department of Community and Economic Development. Federal grant dollars of approximately $1.2 million are expected to be received next month. The total project cost was $4.2 million.

“As a responsible manufacturer, we’ve taken a number of green steps over the past several years, but the solar energy project was definitely the most ambitious,” stated Ken Baker, NewAge’s CEO. “It’s a great way to use renewable energy, help our community, and contribute to our bottom line.”

NewAge partnered with Independence Solar, based in NJ for the development and financing of the project and Borrego Solar Systems Inc., based in California, for the design and installation of the system. The solar panels – over 4,000 of them – were made in the U.S. by SolarWorld USA of Hillsboro, Oregon. The racks that support the panels and the inverters, which convert the electrical current, were also manufactured in the U.S.

“We thought it was necessary to buy American made,” he said. “We’re getting money from the state of Pennsylvania and the federal government. We felt, as a consumer, we make the choice.”