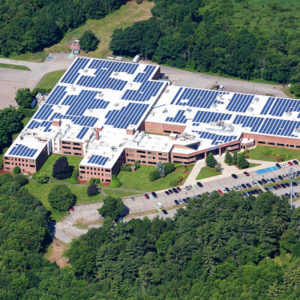 BOLTON, MA – Paragon Communications partnered with Independence Solar to install a 1,200 kW rooftop solar array at its Bolton, MA headquarters. The 4,000-panel installation will offset about 50% of the 300,000 sq. ft. building’s annual usage.

Having relocated to their new headquarters in Bolton, MA in 2013, Paragon was looking to expand its sustainability initiatives in a big way while making a solid financial investment.  Independence Solar worked with them from the initial project feasibility stage through financing and construction of the state of the art solar facility.  The project broke ground in September 2014 and began producing clean energy and savings by the end of the year.

Paul Gentili, CFO at Paragon Communication, comments: “Investing in solar was definitely the next move for us. We methodically researched and planned this for a long time and will reap the benefits for years to come. Independence Solar delivered a high quality project on time and on budget, while making the experience seamless on our end.”

James Schwartz, Vice President at Independence Solar, comments: “Paragon is one of the leading technology companies in New England because they are constantly innovating while making smart investments in their business.  This solar system fits perfectly with that game plan as it significantly reduces their operating costs while demonstrating their commitment to sustainability to their customers, partners, and employees.  It has been a privilege to work with a visionary company like Paragon.”

The system is one of the largest rooftop arrays in Massachusetts.  Many of the system components were sourced from local suppliers, including the power inverters that were manufactured just down the road in Lawrence, MA.