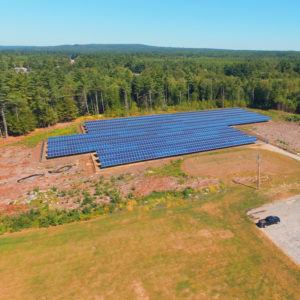 Source: Fosters.com, Dave Andreesen
ROCHESTER — One of the oldest manufacturing companies in Rochester that’s been a fixture in the community for more than five decades is now making a leap into the future by building one of the largest private solar fields in the state.

Jarvis Cutting Tools is currently constructing a 500,000 kilowatt solar array in front of their property, located on Jarvis Drive off of Route 125. According to President Costikyan Jarvis, he said this is the right move for the company to not only cut production costs, but to capitalize on incentives for producing solar energy.

Jarvis Cutting Tools, which currently employs about 100 people, moved its operations from North Attleboro, Mass., after building the facility in Rochester in 1967. They manufacture cutting tools for other manufacturing companies that enable them to make the internal threads in their products. For example, Jarvis said they produce the cutting mechanism that allows an oil filter to be screwed onto car engines.

“We make the tools that make the internal threads in a hole,” Jarvis said. “We work with industrial consumers that want a measureable advantage over competitors, so we develop exclusive solutions for their needs.”

Jarvis, the fifth generation to be involved in his family business, said any excess power generated would be routed to the electrical grid and sold to Eversource. As with many solar fields operating in the northern latitudes that sees reduced sun in the winter, Jarvis will still be connected to public power, primarily because of their manufacturing schedule.

“We will certainly use the power we make,” he said. “We’re still going to be on the grid because we run a second and third shift where there’s not a lot of sunlight to make power.”

Jarvis utilized the New Hampshire Public Utilities Commission Commercial and Industrial Solar Incentive Program, which offers rebates and financing on new construction up to 50 kW. Solar projects are allowed to surpass that capacity, but are not eligible for the full tax rebate or financing. The program was funded for $3,886,000 last year.

Jarvis said it was a “long effort” by many including the Public Utilities Commission to get the project approved, and he lauded those involved in the local permitting process with the City of Rochester, including the Planning Board and fire and police departments.

Connecticut-based Independence Solar is the developer, with KW Management hired on as the Electrical Contractor and Veno Construction the civil contractor.

With 2,100 solar panels still left to be erected, Mark Weissflog of KW Management said it should take about another six weeks for completion, with the system going online and producing power by early August.

The added benefit of producing solar energy — aside from the environmental — is a reduction in energy costs that can be returned to a company’s bottom line, although that return is not normally seen for a few years after the initial investment has been paid off.

“It’s neutral for seven years,” Jarvis said. “There’s some benefit, but the real benefit kicks in down the line.”