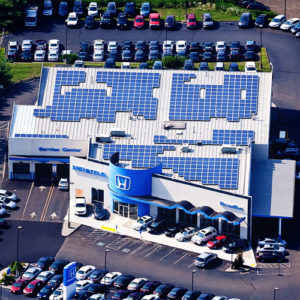 BRANFORD, CT — Independence Solar announces the completion of a 140 kW rooftop solar array for Brandfon Honda in Branford, CT. The installation contains 564 panels and will offset more than 75% of the building’s annual usage. Independence Solar worked with its installation partner, Branford-based Pat Munger Construction, to complete the project on time and on budget.

James Schwartz, Vice President of Independence Solar, commented: “It was exciting to work on this project with Brandfon Honda. They are one of the first automobile facilities in the area to go green with solar energy. The value of their investment in solar will continue to reap economic benefits for years to come.“

The solar project was brought online in less than three months and achieved commercial operation in July 2014. The installation will participate in Connecticut’s Zero Emission Renewable Energy Certificate (or “ZREC”) program and has a 15-year contract secured with the local utility, Connecticut Light & Power.